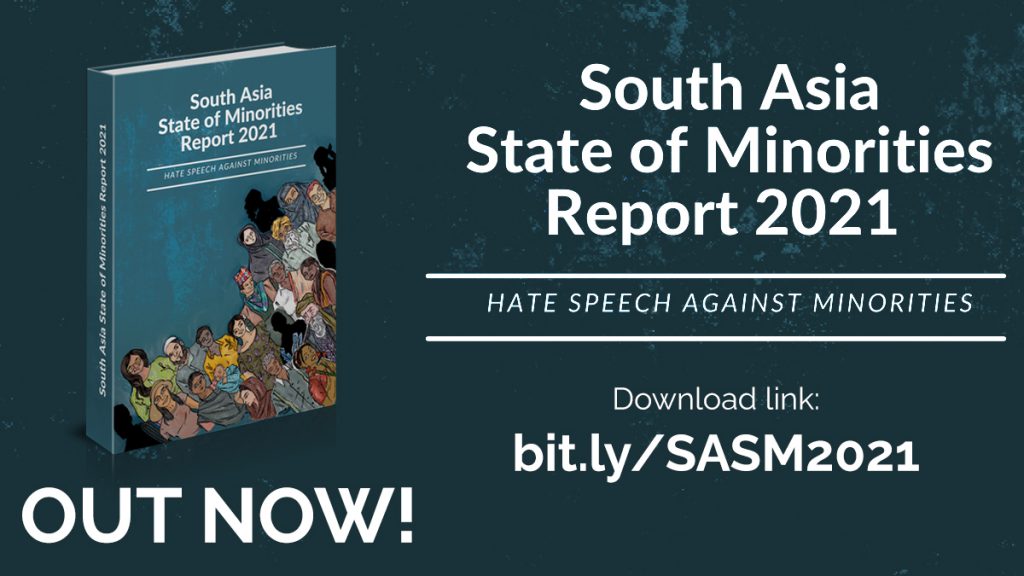 In most of the countries of South Asia, hate speech is increasingly used by majority groups against minorities on the basis of religion, ethnicity or linguistic difference. Some of the groups under attack, in turn, are found to be victimising others at the same time. The common denominator driving hate speech in the region currently are the ubiquitous online platforms, primarily social media. Another common factor is the introduction of laws framed to restrict freedom of speech in the guise of protecting citizens against hate speech and violence. Taken together with the rise of hyper-nationalism promoted by majority groups, it has resulted instead in the shrinking of civic space and state-sanctioned hate speech through legislative enforcements.

South Asia State of Minorities Report 2021: Hate Speech against Minorities presents chapters from Afghanistan, Bangladesh, India, Nepal, Pakistan and Sri Lanka to highlight how hate speech has been used in the various country contexts to advocate violence against minority groups and how it has led to their further suppression. This volume is planned as a tool for advocacy. It is hoped that these annual reports on outcomes for minorities and the quality of state provisioning will spur public debate in the region and create the conditions for state parties, and regional and international mechanisms to give serious consideration to issues of minorities. The purpose of the initiative is to promote equal citizenship and equal rights for all citizens, a central challenge of the ‘deepening democracy’ agenda in the region, and to highlight the alarmingly narrow civic space for minorities, including human rights defenders, journalists and activists. A major tenet of democracy is protecting civil society while also encouraging its vibrancy. It is the responsibility of states to ensure that citizens can freely exercise their fundamental rights of speech, assembly and association without fear, and guarantee access to legal remedy if and when these rights are violated. The world at large is, however, experiencing a constriction of civic space and nowhere is this more apparent than in South Asia. South Asia State of Minorities Report 2020: Minorities and Shrinking Civic Space highlights how civil society across the region has been navigating the terrain of state practices, especially with regard to advocacy of minority rights. While the regression of civic space affects society at large, the dynamics and impacts of restrictions tend to be particularly severe, and take place with greater frequency, for minorities and those who raise a voice for their rights. This volume presents chapters from Afghanistan, Bangladesh, Bhutan, India, Nepal, Pakistan and Sri Lanka, reporting on the state of civic space within their respective territories.
Full Report
Translations of country chapters:
Afghanistan - Dari/Persian (محدود شدن فضای مدنی برای مدافعان حقوق بشر در افغانستان)
India - Hindi (भारत में नागरिक दायरे का सिमटना: लोकतंत्र के पाँव समेटने के बीच अल्पसंख्यकों पर हमले)
India - Urdu (ہندوستان میں شہری دائرہ کی تنگ دامانی جمہوریت کی محدودیت کے دوران اقلیتوں پر حملے)
Sri Lanka - Sinhala, Tamil As conflict, persecution or the pursuit of better opportunities have led to increased migration throughout South Asia, our understanding of minorities must also evolve. The region’s religious, ethnic, linguistic and gender minorities remain marginalised from the mainstream of development, and experience violence from both state and non-state actors. Migrants, refugees and the stateless make up a disproportionate number of the poor and excluded in these countries, and it is these very minorities who disproportionately tend to become refugees or stateless. The South Asia State of Minorities Report 2019: Migrants, Refugees and the Stateless seeks to identify the different groups that have been denied, among other things, access to fundamental rights and services, and, in some cases, even recognition of their status. The report demonstrates how this impacts their everyday experiences and enables abuse of their human rights. The report presents six country chapters—Afghanistan, Bangladesh, India, Nepal, Pakistan and Sri Lanka—reporting on the condition of the migrants, refugees and the stateless population within their territories, while also providing recommendations to better protect their rights.

South Asia’s minorities – religious and linguistic groups, especially women and those from Dalit backgrounds amongst them, and the many indigenous/adivasi communities, besides sexual minorities – make up disproportionate numbers of the poor and excluded in each country, suffering discrimination in the socio-economic sphere and denial of the most basic human rights. The South Asia State of Minorities Report, 2018: Exploring the Roots seeks to examine the reasons for the poor outcomes for minorities in South Asia, shining a light specifically on their socio-economic situation and their access to rights and opportunities. South Asia demonstrates amply how failures to prevent exclusion and discrimination against those groups.

The inaugural edition of the South Asia State of Minorities Report series seeks to create a baseline of minority groups and minority rights regimes, mechanisms and practices, by country, for the South Asia region. To do this, the report examines both the theory and the practice of minority rights protection in each country, looking at the range of rights guaranteed by national and international instruments. It also proposes a set of recommendations for the region, as well as for each country, separately. This report covers six SAARC member countries, ciz. Afghanistan, Bangladesh, India, Nepal, Pakistan and Sri Lanka.